Joe Cai
New York
Central Park
There is a large park in New York with a high-rise building.
Central Park is located in the middle of Manhattan, a skyscraper with skyscrapers. It is the largest urban park in New York and is known as the back garden of New York. Its beautiful scenery is definitely the darling of the movie lens. Of course, it's not just the scenery that looks from the sky. The most important thing is that there are light green meadows, small forested courtyards, ice rinks, carousels, amphitheatre, etc., which can be used for boating on lakes, tennis courts, sports fields, art galleries, etc. Artificial natural landscape.
The movie "Morning Anchor" has a clip, that is, the woman owner has been reporting the results of her efforts to the superior in order not to be cut. At that time, the superiors were running in the Central Park in the morning...
The central park has a lot of vegetation, and the summer is a lush piece. And if it is autumn, the scenery is even more amazing! Although I didn't go to play in the fall, the photos I saw and the scenes of the movie were really amazing! As described in the movie "The Queen of Prada", in order to shoot a series of photos of the "urban jungle" for the magazine, modern women are conquered by releasing the inner wildness.
In Central Park, you can see the world in which you live and travel in New York. Some of you have some games and some sports, but you can find the time in the bustling metropolis.
luxuryhotelsscenicspotguidetotdspringtravel
Posted: 10 Apr 2019
Related Moments 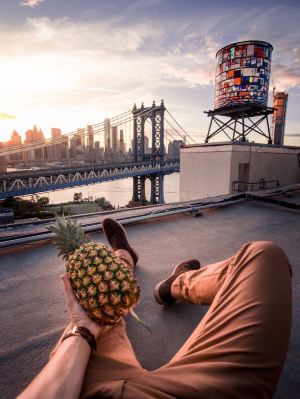 How many times have I seen thos elocations before moving to New York City? 🗽 Probably way too many times that I cannot count anymore. I’m glad this city has so many iconic buildings, mesmerizing vantage points and overall just amazingly photogenic scenes. I believe this strongly contributed to my urge of discovering the city and exploring the unknown, and thus helped me improve my eye and my photography. This was a way for me to connect with the environment, meet people, and create a meaningful connection with like-minded creators. So for all that you have given me, Thank You New York, Sincerely, Jérôme ☺️❤️
JeromeTraveller 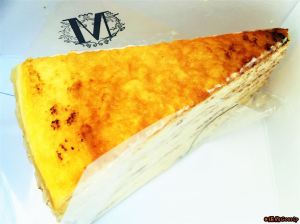 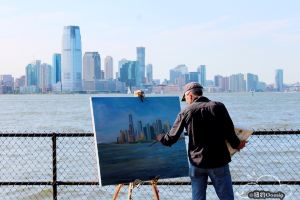 Governors Island
Governor's Island is roughly on the south side of Manhattan Island and can be reached by ferry in summer and autumn. From the Battery Maritime Building in Manhattan, take the ferry to Governors Island and the fare is only 2. If you look at the map, the Governor's Island looks like an ice cream, so I gave it a nickname called Ice Cream Island. There are not many residents on the island, but everyones net worth is not low. Many people take their own speedboats to and from Manhattan every day. The environment on the island is very good. At this moment, I can think of the happiest thing, that is, I can find a small island that is so uncontested and grow old with you.
New_York_Gossip 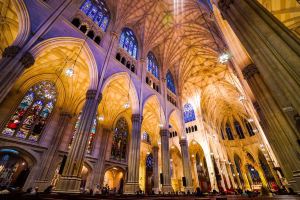 New York is a cosmopolitan city, giving people a colorful and bustling impression. I didn't expect that in this section of high-rise buildings, there is a church with a heavy history. St. Patrick's Cathedral St. Patrick's Cathedral is on the edge of New York's busiest Fifth Avenue. It was also the place where the Archbishop of the Vatican visited the United States. Its simple and elegant Gothic architecture is particularly eye-catching on Fifth Avenue, full of fashion, taste and even luxury. It is also the largest Gothic-style Catholic church in the United States, with a history of more than 130 years and is now home to the Catholic Church in New York. The church is open all year round. It is worth spending half an hour to go and see, feel the solemnity, and appreciate the church's imposing space and exquisite architectural style.
church
Mimo Chiu 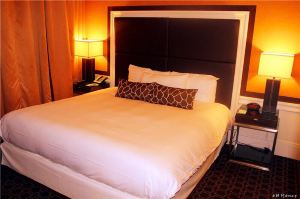 The Empire Hotel NYC is a mid- to high-end hotel located in the Upper West Side of Manhattan, New York. It is also a hotel owned by Chuck Bass, the main character of the Gossip Girl. There are many scenes in the show. The Imperial Hotel can be called a small base of Gossip Girl. Some cocktail names in the rooftop open-air lounge are even For the characters in the play, such as Lonely Boy, whoever saw the play knows who it is. Once you enter the hotel entrance, you will see a very grand lobby with a bar next to it. The front desk is on the right hand side of the door. This time I stayed in a standard queen room (STANDARD QUEEN). A credit card will be required to check in at the front desk. Some of the funds will be pre-authorized for use as a deposit. It may be more than the actual check-in, but the amount will be adjusted after check-out, so don't worry. After check in, take the elevator to the room. The decoration of the room makes people feel very comfortable. The size of the queen size bed (sleeping 1~2 people) is not bad. The bathroom is also quite large, unlike many hotels that have a narrow feeling. The desks and chairs are wooden and very comfortable. There are snacks, wine and capsule coffee machines on the desk (for a fee). In addition to the coat cap, there is a small refrigerator in the cloakroom with lots of non-alcoholic and alcoholic beverages (for a fee). It should be noted that there are no slippers and toothbrushes in the room (the disadvantages of many American hotels). Hotel service is in place, the front desk service is very good, what is the need (such as room service) can call from the room, the staff will be very patient to answer and help. The hotel's WiFi is available for a fee, which is a disadvantage of many mid- to high-end hotels in the United States. Location and transportation, the hotel is very close to the subway station, you can see the hotel from the subway station, walk for 1-2 minutes. The surrounding environment is very good, very close to the Lincoln Center for the Performing Arts and Central Park, just a few minutes walk away. Dining, the hotel comes with 2 restaurant restaurants (LOBBY BAR and ED'S CHOWDER HOUSE), a seasonal rooftop outdoor pool and Pool Deck and Rooftop Bar & Lounge, worth the experience . The price of a cocktail at the rooftop open-air lounge is between 10 and 20. Moreover, the room service can also be called directly from the room, and the menu is on the desk. The feeling of staying at overall is that the hotel's facilities and services are in line with its price, health and comfort are good, it is a pleasant stay.
New_York_Gossip 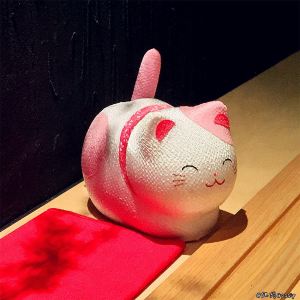 Many people have recommended to me the Manhattan restaurant Hatsuhana "First Flower", a Japanese restaurant, and finally come back to find out. The door was received by the waiter. Find a place to sit down and find the kitten next to it. Order a three-course Prex Fixe (with starter, main course and dessert). The appetizer can be served with miso soup or salad. The main course can be tasted. Spicy Tempura is selected and the dessert is made with matcha-flavored ice cream. Tempura is quite delicious. I am afraid that it will be greasy when I eat fried food, but this does not feel. cost (in US dollars): 27.25 (three-course Prix Fixe) + 2.42 (tax) + tip. The first-time dining environment is very good. I will try sushi at his home next time. There are many flavors to choose from. The sushi at the side table is delicious. Store name: Hatsuhana (first flower). Address: 17 E 48th St
New_York_Gossip

Rockefeller Center
The Rockefeller Center is known as one of the greatest urban plans of the 20th century. The complete mall and office building has made Midtown Manhattan the second downtown city in New York after Wall Street. Manhattan has two viewing platforms: Rockefeller Center and Empire State Building. The main building of Rockefeller Center is 260 meters high and has 70 floors. The viewing platform on the roof provides a bird's eye view of Manhattan. It is the best view of Manhattan. The platform is much better than the Empire State Building, because you can take the Empire State Building and Central Park! Standing at the top, you will find that the city of New York is more vulnerable than Tokyo. The Rockefeller Center has a three-story viewing platform on the roof. The third and second floors have glass walls. The top floor has no obstacles at all. It is very convenient to take pictures. Entering the viewing platform from the third to the last level, there is no need to stay on the third and second floors, and there is no need to take pictures. Because there is a glass wall, it is not clear, and the flash is reflective. Go straight to the top floor, there is no obstacle on the top floor, just take it, the effect is very good.
instagramworthydestinations
unforgettableexperiences
Caitlin_Zhu 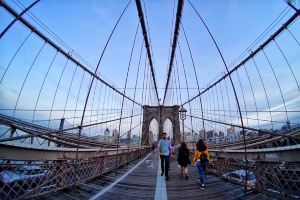 Brooklyn Bridge
In New York, talk about the "bridge", don't hesitate, it means the Brooklyn Bridge. Although the bridge is now rusty, it was the longest suspension bridge in the world, and it was the first bridge built of steel since the Industrial Revolution. Walking on the Brooklyn Bridge, people are on the upper level, cars and subways are on the lower floor, and the vibration of the traffic can be felt at any time. Many New Yorkers who come to the area will choose to take photos of unforgettable wedding photos here. There are also tourists from all over the world who climb the bridge and ask for a unique photo. In the setting sun, the bridge will turn golden. In the clouds, the bridge will turn gray, but what remains unchanged is the position of the bridge in the hearts of New Yorkers and the world. net red punch angle
instagramworthydestinations
decembertravel
Liu Big Fish 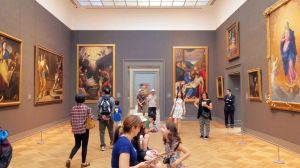 Metropolitan Museum of Art
The Metropolitan Museum of Art is the largest art museum in the United States and a world-famous museum. It is located on 82nd Street in Fifth Avenue, New York, USA. The museum covers an area of 130,000 square meters. It is the British Museum in London, England, and Paris, France. The Louvre, one of the world's four major museums in the Hermitage Museum in St. Petersburg, Russia. With 3 million exhibits, it is the largest museum in the world.
instagramworthydestinations
merrychristmas
decembertravel
nyedestinations
Desperado 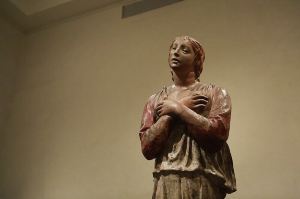 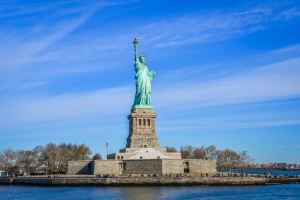 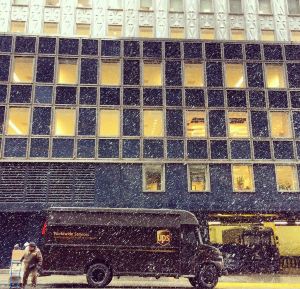 Central Park
Manhattan Center in New York from 59th Street to 110th Street from Central Park. The beginning of October, the foliage gradually started yellowing; it is the best time to take pictures. My favorite from Columbus Circle entrance into the 59th Street all the way to sell souvenirs like painting, as well as ice-skating rink - along the main road to go a little while you can see a large lawn seating area, lying on the lawn of view will book talk a day to eat a picnic looked very nice ah ~ not far from high-rise towers, will feel yourself in paradise, I think this is the center of attraction at the park it.
hugo_enen

Architectural Landmarks: 10 Amazing Buildings Around the World  |  Meet a Billionaire: Cities To Visit To Encounter the Ultra-Wealthy  |  2019 Top-10 Best Things to do in New York City  |  The World's Majestic Cathedrals