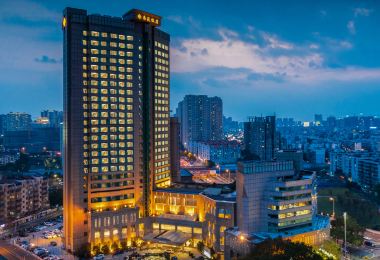 "This hotel was nothing but the best, clean, kind stuff all was amazing. Good can still be betters for westerners all in all great stay. "

Reasons to Recommend: Located in downtown Ningbo's central Haishu district near the Moon Lake Flourishing Garden, a new shopping and eating spot built among reconstructed traditional buildings, the Ningbo Nanyuan Hotel (Ningbo Nanyuan Fandian) is the first 5-star hotel in Zhejiang Province. It is only 15km (9 mi) away from Ningbo International Airport and less than a 30-minute drive to Hangzhou Bay Bridge. In 2007, it won the first "Five Star Diamond Award Hotel" in Zhejiang Province, and was awarded "The Most Influential Hotel in 30 Years of Hospitality Industry in China" in 2008. In 2010, it became the only hotel awarded "China Hotel Golden Star Award" in Ningbo (awarded by China Tourist Hotels Association). 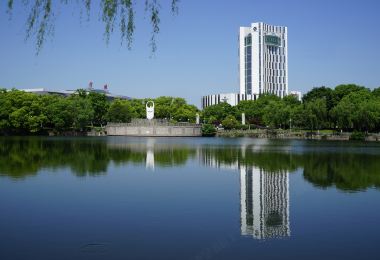 "Very very good hotel, right opposite the railway station however most hotels next to stations are bad, this one wasn’t, clean room, good and reasonable price dinner buffet and breakfast was ok. Furthermore felt safe your hotel card will only take you to your floor from the elevator and no more. However even being a very good hotel just a few suggestions please change your slippers for the room because they are to small and uncomfortable and maybe offer more meat dishes at the buffet because a lot of seafood dishes which I can’t eat...we will be back..." 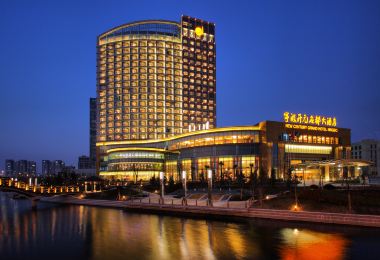 "The decor here is a little outdated and pretty much everything in the room has a price tag on it. Atleast they were very transparent about the fact that it costs money. They served us in English. Great location. Need swimming caps to use the pool. All in all we were satisfied. " 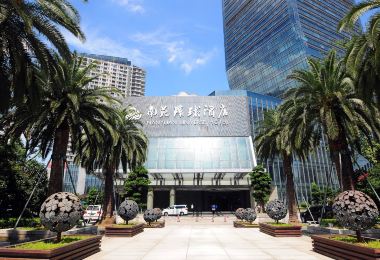 "This hotel is lovely. The staff at the front desk were incredibly helpful and registered my partner and I very quickly and without fuss. A few minutes after check-in the staff brought my partner and I a little fruit basket. Our room was spotlessly clean and the view of the city was lovely. Breakfast is a Western/Chinese style buffet but has many options. When we left the next day, the doorman helped us load our bags and removed his glove to shake hands. This for is a small gesture for many but is an amazing sign of respect from a gentleman. The staff at this hotel are amazing. Will definately stay again. "

Reasons to Recommend: Situated close to Wanda Plaza, the Nanyuan Universe Deluxe Hotel (Nanyuan Huanqiu Jiudian) is a five-star hotel within easy reach of the railway station and the airport. 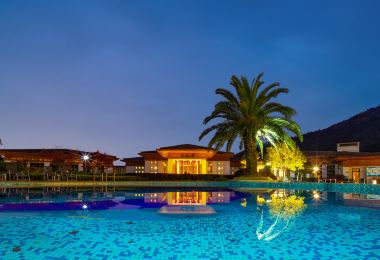 "What a perfect holiday. The staff were amazing and thanks to Cheng Er Hui we had the most convenient and wonderful service the whole trip. The location is beautiful and peaceful. The rooms were clean and huge. Will definitely come again." 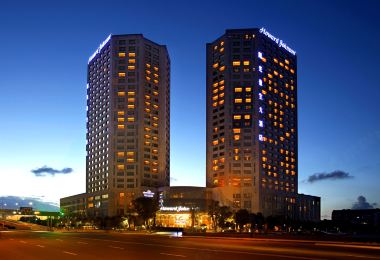 "location is nearby subway. breakfast is always good. hahaha " 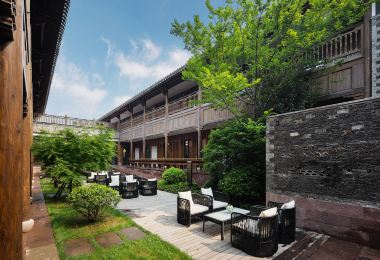 "Wonderful hotel in Hanling village. Staff are super friendly and the hotel is comfortable and stylish. The rooms are cosy and felt very relaxed. The hotel has its own entrance to the village and is perfect for a relaxing weekend. The breakfast is buffet style with lots of vegetables. Definitely coming back, it is also pet friendly!" 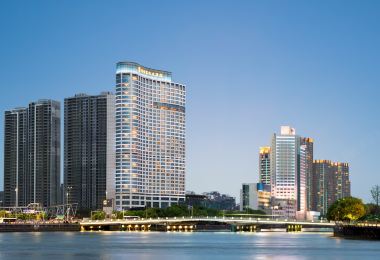 Reasons to Recommend: Located in the heart of downtown Ningbo, Shangri-La Hotel, Ningbo offers 563 luxuriously appointed guestrooms with city views or river views, as well as 57 serviced apartments provides a feeling of “home away from home” during the guests’ stay in this enthralling city. It is just a walking distance to Ningbo’s famous shopping areas – Tianyi Square and Heyi A five-minute drive sees guests to Tianyi Pavilion, the oldest existing private library in Asia. 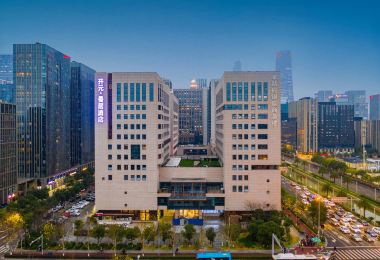 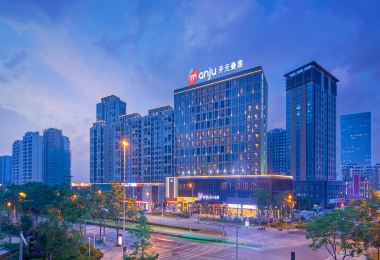 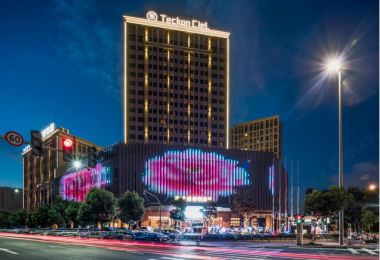 "The location of the hotel is very good, the subway station is covered~ The bed in the room is very comfortable, the bathroom is separated from wet and dry, and the smart toilet is great. The breakfast is very rich, with many choices and delicious taste. The front desk service was good and helped to print a document. The only fly in the ointment is that it is close to the roadside and the sound insulation is a little bit worse." 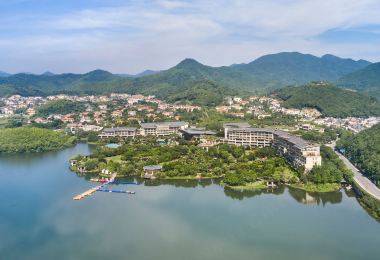 "We had a great time at the New Century Resort at Jiulong Lake. It was a great getaway from the city life. The service was excellent; Mona in particular was very helpful and made our stay even more enjoyable. Though it was raining and less activities were available in the winter, we had a lovely time nonetheless. We're looking forward to visiting again in the Summer."

Reasons to Recommend: The Huacheng New Century Resort Jiulong Lake Ningbo (Jiulonghu Kaiyuan Huacheng Dujiacun) is situated along Jiulong Lake, which is known as the Shangri-la of Zhejiang. And while this Ningbo hotel offers breathtaking views of the surrounding landscape, it also combines natural scenic beauty with modern elements. 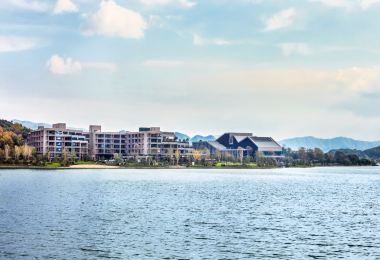 "The hotel’s location is amazing and it was so nice to stay in a hotel which has an incredible lake view. The staff is super kind and helpful. From the moment I did my reservation they cared of everything and during our stay they make us at home. Thank you To Cathy Ni for her professionalism and kindness. Definitely you should visit this beautiful hotel if you are looking for a peaceful holiday " 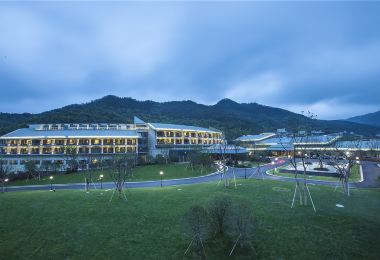 "The service was really great, especially @Melinda the admin lady she was a great help with the bookings and ensuring I have an amazing stay. The rooms are clean, stuff is really friendly and helpful and wow the place is amazing, you don’t know where to go for winter vacation??? This is your destination." 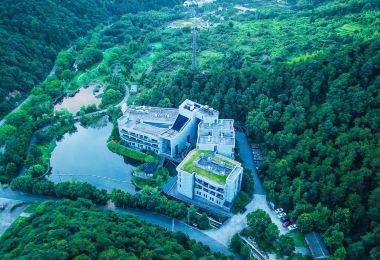 "This hotel is very good, good mountains and water, fresh air, staying in the hotel is particularly quiet, a good place for travel and vacation ⛱️, close to the Wulongtan scenic area, 5 minutes away, the hotel breakfast is very rich, room service and facilities are perfect, The little girl at the front desk was so passionate ❤️," 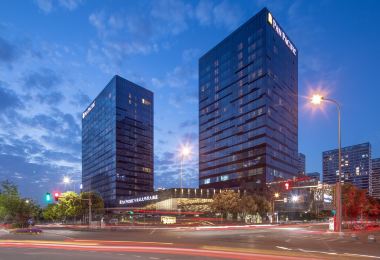 "This hotel is very good with not expensive price. The location is in the middle of office town. So there are not much restaurants or bar around, that would be the only unconvenient. But all the staffs are very kind, the quality of every facilities are exellent. If you take a taxi, you can get in 20 minutes to 老外滩。" 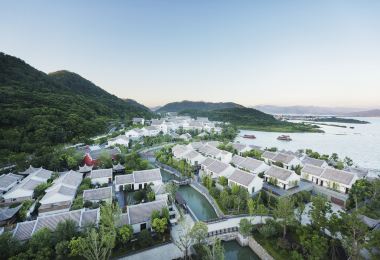 "Truly stunning. A warm welcome with amenities and extras all explained. Booked a spa treatment and dinner from the front desk. The lake facing room had the best view I've ever had from a hotel. A shuttle service to take us to the spa village. The spa treatments were in a cute massage house with excellent service. Dinner was at the fish restaurant which had a variety of reccomended dishes as well as meat or veg options. This allowed for a nice walk back in the evening going around the grounds. Good facilities with a lovely indoor pool and a games room. Breakfast had a huge amount of choice that was constantly being refilled. One downside was children running around with whistles blaring but that is down to poor parenting not the hotel. Nice again to walk around the grounds after breakfast. The room had a comfy bed and huge windows to show the view. A very nice bath too but it would've been improved by including some bath salts or bath lotion. Downsides - the air conditioning in the room wouldn't drop below 24°, fapiaos were a little complicated and not exactly how we wanted it, the shuttle buggys could be slow to arrive and the drivers could dissappear and you would wait for 10 minutes with no driver. The 'Red bar' was also closed so no where to go for a quiet drink. Overall I would give and 4 3/4 stars out of 5"

Reasons to Recommend: The resort and free-standing villas of the Park Hyatt Ningbo (Ningbo Baiyue Jiudian) are located along the banks of &lt;a target="_blank" href="http://www.chinatravel.net/china-attractions/dongqian-lake/introduction-1423.html"&gt;Dongqian Lake&lt;/a&gt;, a serene getaway just outside of &lt;a target="_blank" href="http://www.chinatravel.net/china-destinations/ningbo/cityintroduction-89.html"&gt;Ningbo&lt;/a&gt;. From Shanghai, it's just a 2-&frac12; hours' drive. 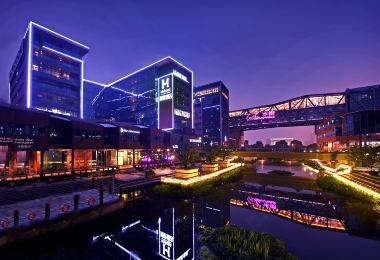 "10 mins to metro. Shops and restaurants nearby. Room not absolutely clean. Stains on desk and floor. Shade in bathroom not in good order as water from shower constantly crushes the shade."

Reasons to Recommend: The Mehood Hotel provides a great place for travelers to relax after a busy day. Visitors to Ningbo will find that the Mehood Hotel is a fantastic accommodation choice. 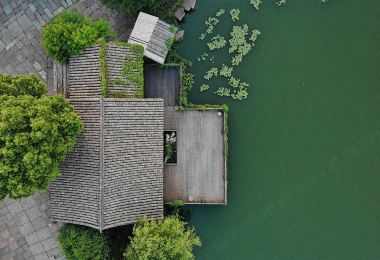 "The children have not experienced the accommodation tour of ancient buildings. This time, the day before New Year's Eve, they deliberately chose the seventeen-bedroom Kaiyuan Guantang, which is closer to home. After lunch, they went out, because it was still close, and it was after 12 o'clock to the hotel. There is a shuttle bus to the room. Our shuttle bus is not sheltered from the wind and rain, and the children are a little shivering when sitting together in the rain. Fortunately, I strolled around the 17th room with the children for a while in the afternoon, and I was looking for the Children's Paradise in the back. The most pitiful thing was that the marked map of the Children's Paradise was wrong. It was raining and cold that day, and there were few people on the road. I found the person who asked me on the other side. , but at the other end, I found three laps of road signs for toilets. There is no children's playground. After more than an hour of back and forth, some people said that they found out that it was a small house opposite the toilet, and the sign outside the house exceeded 5. Mi can't see clearly. Later, when the park went out, I saw another child's mother looking for the child's paradise on the map, telling them to avoid detours. I originally wanted to check out to give my opinion, but when I checked out, the child was not feeling well and got on the bus ahead of schedule."

Reasons to Recommend: The Shiqifang Kaiyuan Resort is one of the newest hotels in Ningbo, having been renovated in 2019. 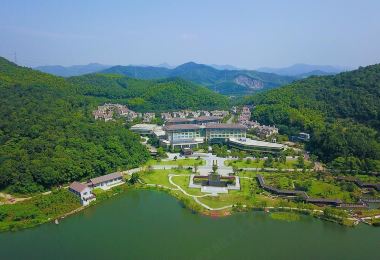 "The hotel is in the middle of nowhere. There are no restaurants around so you have to eat in the hotel. There are nice paths to take a walk or small hike around. The swimming pool is nice and they also have a great play area for kids. "