The Palace of Phnom Penh, also known as the Great Palace of Four Arms Bay, was built by King Norodom in 1866-1870 at the confluence of the Upper Mekong, Donglisa, Lower Mekong and Bassa rivers. It was designed by the top architects of Cambodia and is the palace of the King of Cambodia. The palace's architecture is of high cotton traditional architectural style and religious color. The palace has steeple, representing prosperity. The palace body is painted in yellow and white, yellow represents Buddhism, and white represents Brahmanism. The palace was initially built of wood and then rebuilt into a cement structure, but it maintained its original style. The murals in the corridor around the palace are elaborate Indian mythological stories drawn by 40 artists. The palace is rectangular, 435 meters long and 402 meters wide. It has a wall outside. There are more than 20 buildings in it. The building is rich in Khmer traditional style and religious color, mostly yellow and white, yellow represents Buddhism, white represents Brahmanism, so it looks golden. In the center of the roof of the palace building, there are tall spires, the two ends of the roof are pointed upward, beautiful in shape and brilliant in gold and blue. The whole palace is divided into two parts. The northern part of the palace is inhabited by the Royal family. Visitors can not enter the palace. The southern part of the palace is the Silver Palace. Each part has its own wall, with a passage in the middle and a door connecting. In addition to foreign tourists, local Cambodians also worship a lot. Entering the Coronation Palace and the Silver Palace, you need to take off your shoes and hats, and take off your shoes on the shoe rack outside the gate. Photography is strictly prohibited in the palace. 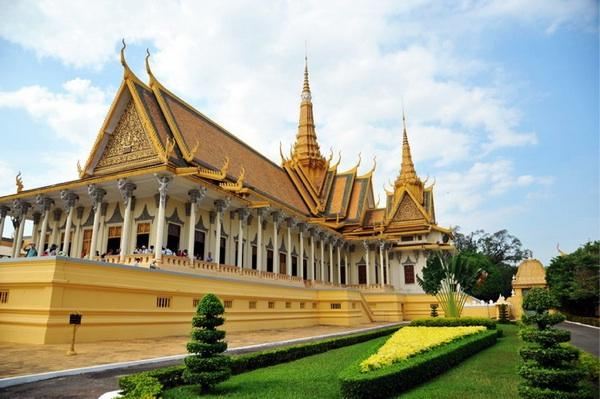 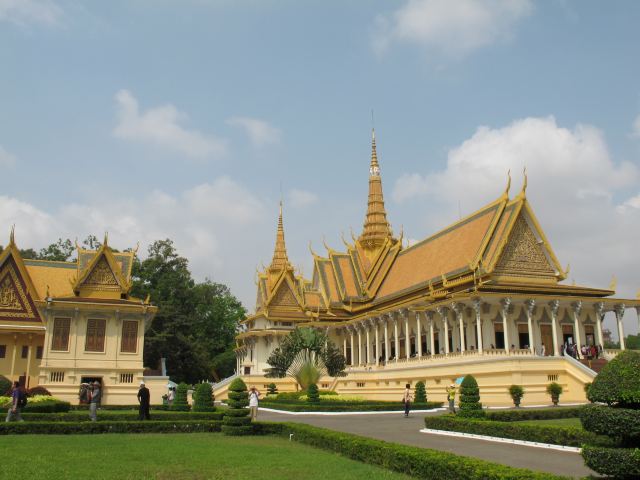 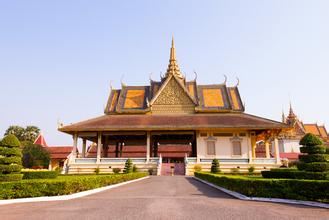 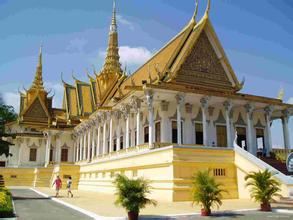 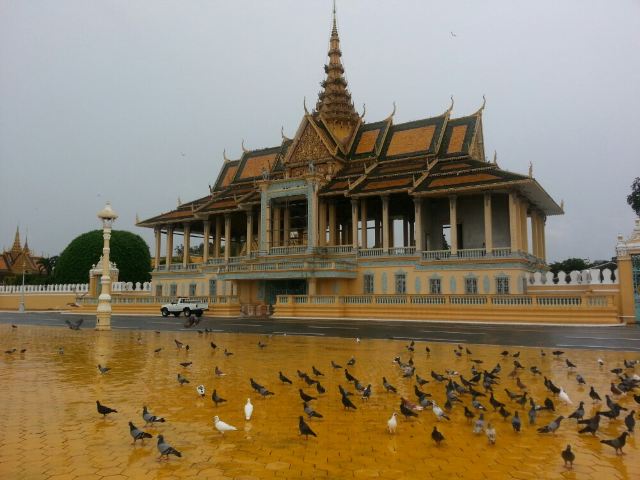 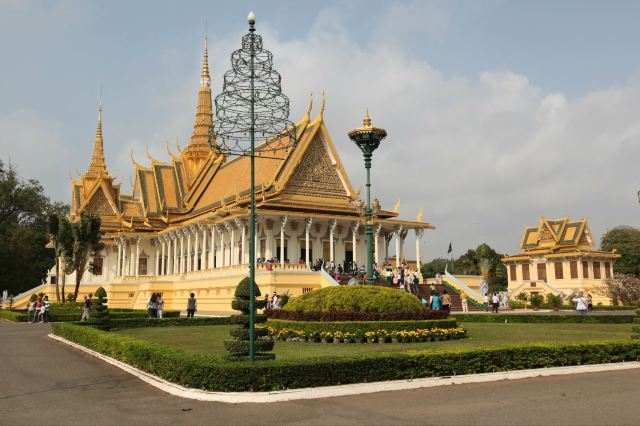 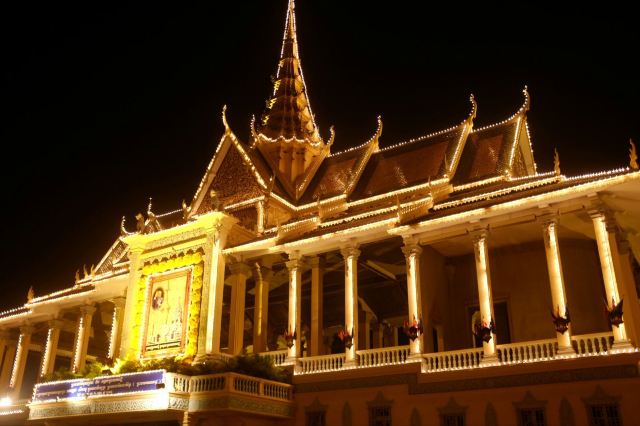 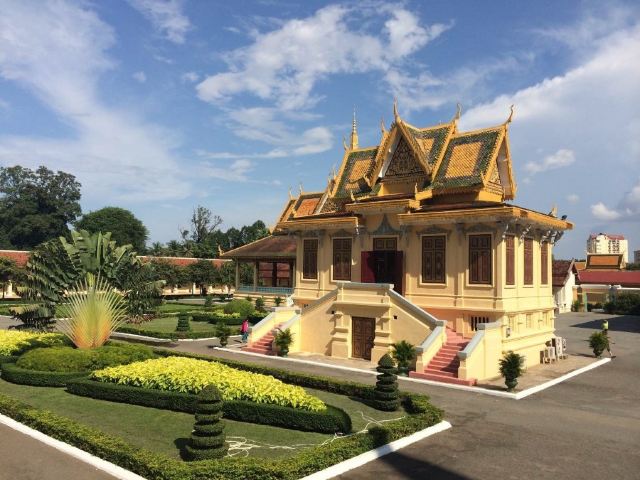 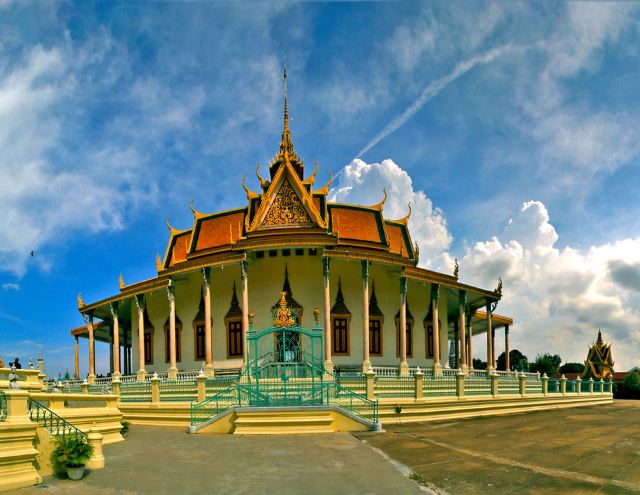 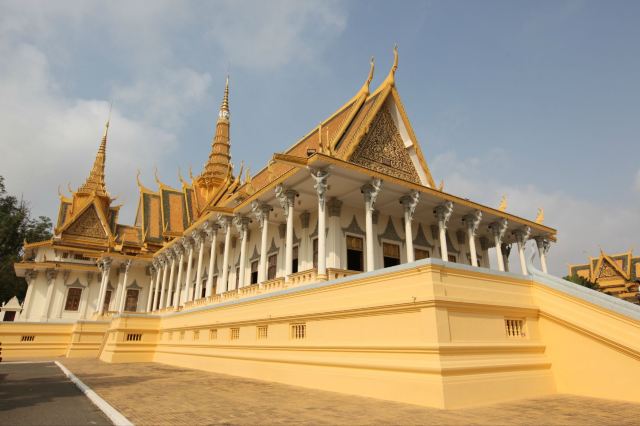 D30****2279
D30****2279
5/5
Reviewed on 20 Aug 2019
0
5/5
The establishment of the Royal Palace in Phnom Penh in 1866 is a comparatively recent event in the history of the Khmer and Cambodia. The seat of Khmer power in the region rested in or near Angkor north of the Great Tonle Sap Lake from 802 AD until the early 15th century. After the Khmer court moved from Angkor in the 15th century after destroyed by Siam, it first settled in Phnom Penh which back then named as Krong Chatomok Serei Mongkol (Khmer: ក្រុងចតុមុខសិរីមង្គល) in 1434 (or 1446) and stayed for some decades, but by 1494 had moved on to Basan, and later Longvek and then Oudong. The capital did not return to Phnom Penh until the 19th century and there is no record or remnants of any Royal Palace in Phnom Penh prior to the 19th century. In 1813, King Ang Chan (1796–1834) constructed Banteay Kev (the 'Crystal Citadel') on the site of the current Royal Palace and stayed there very briefly before moving to Oudong. Banteay Kev was burned in 1834 when the retreating Siamese army razed Phnom Penh. It was not until after the implementation of the French Protectorate in Cambodia in 1863 that the capital was moved from Oudong to Phnom Penh, and the current Royal Palace was founded and constructed.
E34****8160
E34****8160
5/5
Reviewed on 29 Sep 2019
0
5/5
day28/9/19 my mum bring me to sort tour with english khmer guied to tell me about the royal palace , i never know that my king house look very awsome and intersting for me too ,one time i will go again because this time i missing one place , they not allow to entry
_FB3****1048
_FB3****1048
5/5
Reviewed on 17 Oct 2019
0
5/5
Royal palace is the residence area of the King of Cambodia. it is locate in the middle of the city and in front of the four rivers crosing each other. where every year in November there are croud of people to join the water festival.
135****3211
135****3211
5/5
Reviewed on 5 Jul 2019
0
5/5
A very spacious palace grounds in the center of Phnom Penh Close to the river. The Silver Pagoda inside is home to beautiful bouddhist artifacts and antiques and the flooring is silver covered by a thin layer of carpet.
Show More